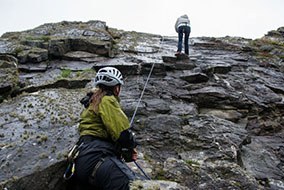 Is Clare Island the Best Place to Go Wild in Ireland?

There’s a bit of excitement floating around Mayo this morning. A few weeks ago The Irish Times launched a campaign to discover the Best Place to Go Wild in Ireland. Every county in the country got nominated but out of a total of 3,800 nominations, Mayo was way out in the lead with more than three times the number of nominations than any other county.

Last week they announced a long list of 20 destinations, which included three from this starkly beautiful county: Erris, Clare Island and the Blueway (Mayo/Galway coastline). That makes for very happy campers here at Destination Westport as Clew Bay is included in the Blueway and is Clare Island’s home. We’re the perfect base for you to explore either (or better still – both).

Today, the shortlist was announced – the top 5 places to Go Wild in Ireland are officially declared to be in Kerry, Donegal, Cork and Mayo. And the great news for Mayo is that it is home to two of the five: Erris and Clare Island.

The next stage is for each of the five destinations to be visited by the full panel of judges. That will happen over the next two weeks and one will be selected as the ultimate place to Go Wild in Ireland. Forgive our bias but we’re rooting for our neighbours – good luck to Clare Island. We highly recommend you check it out the next time you come to visit Westport.