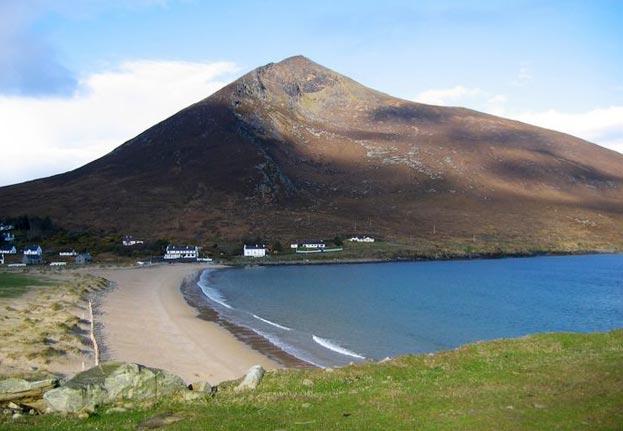 Achill island, a 45 minute drive from Westport has great 5 Blue Flag beaches, adding to Achill’s attraction as a day trip from Westport.

This Blue Flag beach, just 8 kilometres from Achill Sound, is Camport Bay, on a small coastal inlet, at Dooega village. The beach is on the Atlantic Drive, which overlooks the Atlantic Ocean along the southern edge of Achill island. The landscape around the beach is a low lying flat coastal grassland of machair. Parking is available, and there is an access ramp, as well as life-saving equipment on the beach, but no lifeguard.

Also known as Trawmore Strand, this Blue Flag beach is approximately 4 kilometres long. It is well signposted in the village of Keel, on Achill island. The sandy beach is backed by a storm beach formed from boulders and shingle thrown onshore during storms. Views to the east of the Minaun Cliffs are spectacular. There is a lifeguard in the summer; swimming areas are clearly marked, to avoid strong undersea currents in places. The beach is very popular for watersports, and surfing instruction is readily available.

Though the approach from the ample carpark is relatively flat, making wheelchair access to the beach reasonably easy, there are no wheelchair-accessible toilets at the beach. There is one at the adjacent campground.

One of the most famous beaches in Mayo. 10km (just over 6 miles) west of Keel village on Achill island, the road ends at the carpark for the Keem Blue Flag beach, after a spectacular winding drive, overlooking the Atlantic. The beautiful horseshoe bay is overlooked by Croaghaun Mountain to the northeast and Moyteoge Head to the southwest; a stepped valley rises behind the beach.

There is a lifeguard in the summer and a fairly steep ramp down from the carpark, but no wheelchair-accessible toilet.

Also known as Pollawaddy Strand and Silver Strand, Blue Flag Dugort (also Doogort) beach lies in the shadow of Slievemore Mountain, next to Dugort village on Achill island. The smaller of the two beaches at Dugort, it is popular with local swimmers, especially for the ceremonial quick dip on New Year’s Day. There is a lifeguard in the summer. Grassy areas behind the beach provide shelter, and there is a parking area with a picnic tables.

About 3 km (just under 2 miles) east of Dugort village on Achill island is Blue Flag Golden Strand, also known as Barnyagappul Stand, from the Irish for “gap of the horses.” This is the larger of the two beaches at Dugort and, like Dugort Strand, has a lifeguard in the summer. Behind the pebble-strewn upper limit of the sandy beach, the dunes host a varietyof native plants and wildlife. There is a carpark, but the beach is not wheelchair-accessible.

Achill beaches on the map