The history of Achill island

Achill island has a long and troubled history. The first people came to the island about 5,000 years ago and since then Achill has witnessed the arrival of Christianity, the power of Granuaile, plantations from Ulster, great rows between Protestants and Catholics and the decline of the ancient disappearance way of life.

Achill has a history of human settlement that is at least 5,000 years old. The remains of megalithic tombs and monuments suggest settlement by Neolithic man in the 3rd or 4th centuries BC. These people significantly changed the landscape of the area, which at the time was heavily forested. Neolithic culture brought farming to Achill, requiring the clearing of forest for cereal crops, and walled fields for livestock. It is estimated that at the end of the Neolithic period, about 4,000BC, Achill had a population of 500-1000 people.
Evidence of Bronze Age (c. 2000BC) settlement on Achill includes hut platforms and associated field systems and enclosures in the area of Slievemore. The remains of several promontory forts along the coast show that settlement expanded across Achill Island in the Iron Age (c. 400BC).

The arrival of Christianity

The early medieval period, dating from about 400 AD, saw great expansion in agriculture, in particular with the introduction of more iron tools, including the plough. Evidence of early medieval artefacts has been reported at Keem Bay, Slievemore, Kildavnet and Achill Beg island. The arrival of Christianity into Ireland at about this time is reflected in two remnants on Achill: at Kildavnet the ancient church is named after St. Damhnait (St. Dympna), a 7th century saint, and at Slievemore there is an ancient church site and Holy Well, both dedicated to St. Colman, also a 7th century saint.

The O’Malley’s and Granuaile

Achill lay within the ancient Kingdom of Umaill which was ruled at various times by a small number of families or clans including the Butlers, the Burkes, the O’Connors, the O’Donnells and, probably most famously, the O’Malleys. The name O’Malley is still common in Achill today, and the original Clan O’Malley has had links to the area since at least the 12th century. The best known member of this family was Granuaille (Grace O’Malley), the legendary Pirate Queen whose son own Kildavnet Castle. Under her leadership the O’Malleys controlled the waters of the western seaboard, imposing taxes and levies on all ships passing through this territory. 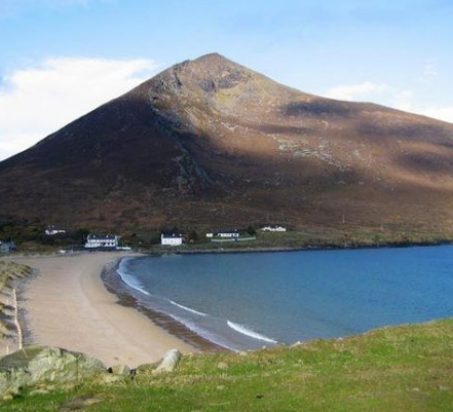 In the 17th century the Cromwellian clearances from the lush farm land in the north and east of Ireland dispersed many native Irish families into the remote and harsh landscape of the west. It is thought that many Ulster families sought refuge in Achill, and the prevalance of Ulster surnames in modern Achill supports this. Names such as Gallagher, O’Donnell, Corrigan, Cafferkey and Mulloy are common in Achill but have their origins in Ulster.

Between 1831 and 1834 a Protestant missionary settlement including schools, cottages, an orphanage, a small hospital, a hotel (now The Slievemore Hotel) and a church was built at Dugort by Reverend Edward Nangle and can still be seen today.

The ‘Colony’ was very successful for a time, even buying two-thirds of the island in 1850. Its success provoked a great long-running row between Nangle and the Catholic Archbishop John McHale, who built a monastery in nearby Bunnacurry in the 1850s to counteract the strength of the Colony

During the Great Famine of 1845 – 1849 there were many accusations of “taking the soup”. In 1848 there were more than 3,000 people working for the mission, clearing land, building roads and walls, etc. In July 1847 it was estimated that 5,000 of Achill’s total population of 7,000 were receiving daily relief from the mission.

The mission fell into decline from the mid-1850s after Nangle left to become Rector of Skreen, County Sligo, and it was all but gone by 1883.

Read more about the Achill mission on History Ireland 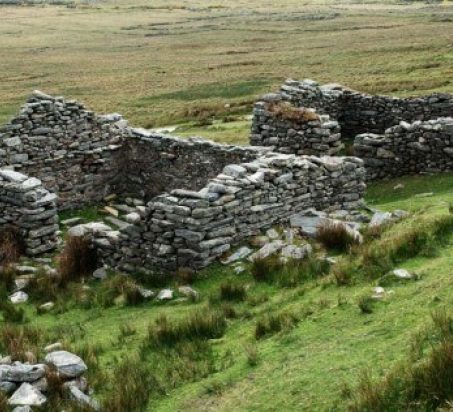 The Deserted Village at Slievemore

Set at the foot of the south-facing slope of Slievemore mountain near Keel, the Deserted Village consists of the remains of almost 100 traditional stone cottages. It is thought that the village was occupied during several different stages in history, with some of the buildings perhaps being constructed on top of previous houses.

The most recent period of habitation came to an end in the early 20th century, when the cottages were used for ‘booleying’ by the local population. As ‘booley’ houses they were occupied during the summer months, when cattle would be grazed on the mountainside, but the residents would return to their homes in the villages of Pollagh and Dooagh for the winter months. Achill is thought to be one of the last places in Europe to have practised this lifestyle. There are a number of other booley villages on the island, including one at Bunowna (in the valley at Keem Bay) and another at Annagh, but Slievemore is by far the largest and best preserved.

Read more about The Deserted Village