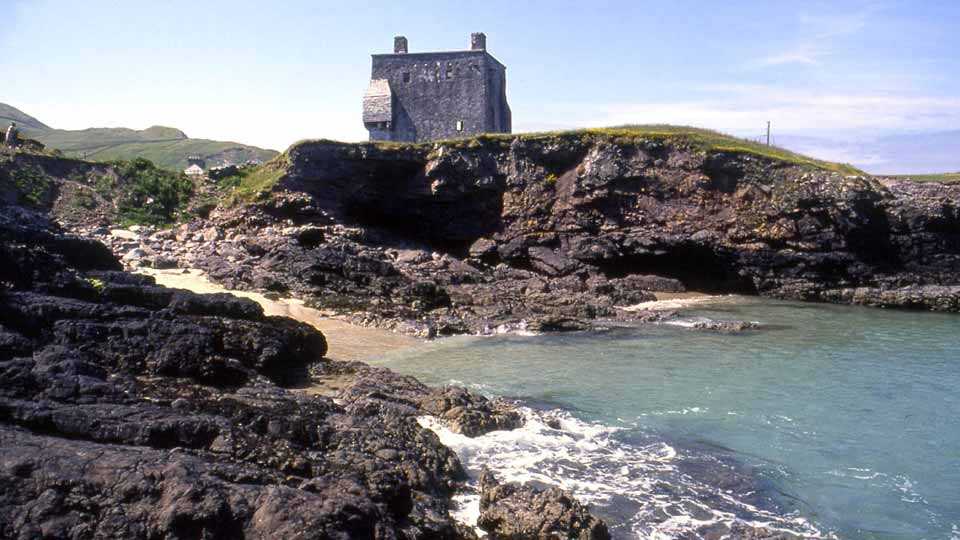 On a rocky headland at the harbour on Clare Island is the square tower which served as Granuaile’s (Grace O’Malley’s) castle. It is said that the Pirate Queen’s head is buried near this castle. This location was strategically vital, as it helped her control the waters of Clew Bay and the seas off the west coast of Mayo.

Built by the O’Malleys in the 16th century, this castle is a fine example of a tower house. Tower houses were often designed to a standard plan, three or four storeys high with a vault over the ground floor. The roof was pitched slate or thatched roof and was protected by a parapet over the entrance so that stones or other objects could be dropped directly onto attackers. Within the thick walls were staircase passages and other features, such as garderobes, or toilets.

Inside Granuaile’s castle on Clare Island, to the left of the main entrance, is a passage in the wall with stone stairs beginning on the first floor above ground level. Access to these stairs was likely via a wooden staircase from the ground floor. The main living room was at that first floor level with access to the bartizans (roofed, floorless turrets) and the garderobe. In the mid 1820s, the castle was converted into a police barracks, when the purple slate flashing was added to the two bartizans.

Granuaile’s Castle on the map