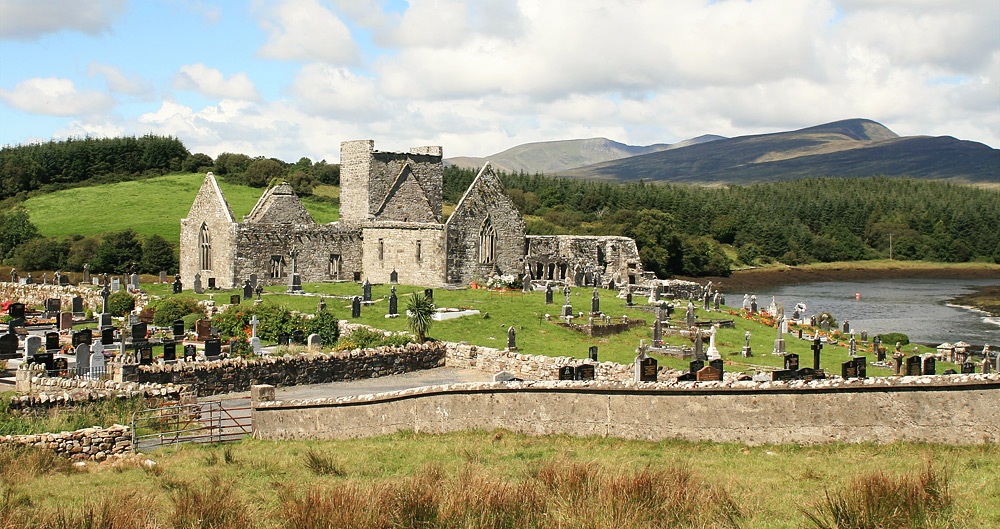 Just over 3km (2 miles) northwest of Newport on the Achill Road (N59), beside a quiet tidal estuary, lies the beautiful ruin of Burrishoole Abbey. It was founded by Sir Richard de Burgo for the Dominican order in 1469, who resigned his lordship in and entered the friary, where he remained a friar until his death four years later. It was built without the permission of the Pope, and it wasn’t until 1486 that Pope Innocent VII instructed the Archbishop of Tuam to forgive the friars.

De Burgo was an ancestor of Risteárd an Iarainn Bourke, the second husband of Granuaile, who owned nearby Rockfleet Castle. Their son Tiobaid na Loinge is buried at Ballintubber Abbey.

Though known locally as Burrishoole Abbey, this name is inaccurate as the Dominican order did not have abbots; therefore Dominican houses are not technically abbeys.

The abbey had a troubled history, due to the political turmoil in the area. The Dominican friars were repeatedly expelled but returned again.

On one occasion in 1652 the abbey was attacked and plundered by English soldiers. They brutally treated two nuns, Honoria Bourke, daughter of Risteárd an Iarainn, and Sr. Honoria Magaen. The two nuns, who were both over 100 years old, fled to Oilean na Naoimh (Saint’s island) in nearby Lough Furnace. They were later captured, stripped naked (it was mid February) and had their ribs broken and were left to die. The oldest inscribed tomb in the Abbey is the O’Kelly altar tomb with a Latin inscription dated 1623. Peregrine O’Cleirigh, one of the Four Masters, is also buried in the abbey. He said in his will, dated February 1664:

I bequeath my soul to God and I charge my body to be buried in the monastery of Burgheis Umhaill.

The remains of Fr Manus Sweeney are buried within the walls of the Abbey. Sweeney, a local patriotic priest, was hanged by British forces on the market crane in Newport in 1799 for the part he played in the French-backed rebellion of 1798.

The abbey fell into ruin in the 18th century, and the roof finally collapsed in 1793.

Today, the nave, chancel, tower and south transept remain, and there are ruins of domestic buildings and a cloister to the north. The cemetery is still in use.

Burrishoole Abbey on the map