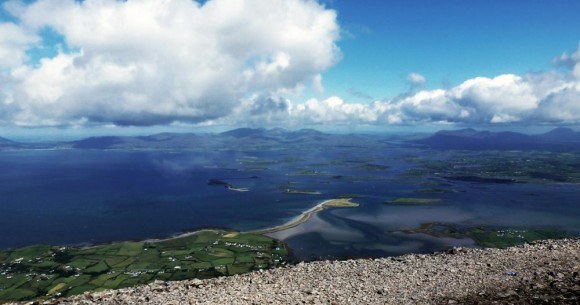 Clew Bay and the islands

Clew Bay and the islands

Clew Bay has, according to tradition, 365 islands, one for every day of the year. It’s probably the most beautiful bay in Ireland, and the views of it from all around Westport are spectacular.

The biggest, Clare Island, guards the entrance to the sheltered bay and is home to 130 people. With its Blue Flag beach and many historical and archaeological sites, Clare Island is a must-see island for the visitor willing to take a short ferry ride.

Most of the others in the bay are are uninhabited, although a few brave souls cling to the age-old tradition of living on a small island all year round.

The islands in Clew Bay are partly drowned drumlins, which are elongated, steep-sided hills, sometimes described as whale-backed, that were formed when glaciers reshaped the landscape in the last ice age. Many of the hills on land around the bay are similar drumlins.

The bay is surrounded by some of the best Blue Flag beaches in Ireland perfect for many water sports.

Collanmore Island is near Westport and is the largest Island in the inner bay. It can be reached via Rosmoney pier, about 10 minutes drive from the centre of Westport. There is the only one resident on the island and there are no roads, no cars – even the postman arrives by boat.

The island offers adventure activities such as dinghy sailing, sea kayaking, stand-up paddle boarding, wake boarding, water skiing, and Sea Safari boat trips. The waters around the island are a safe haven for beginners, and more experienced sea sport adventurers will be completely at home with plenty of secure but challenging open spaces and great winds.

Ferries to and sightseeing trips around Clare Island and others, such as Inishturk and Achill, are available from Westport Quay and also Roonagh Quay which is just a 30-minute drive west of Westport.