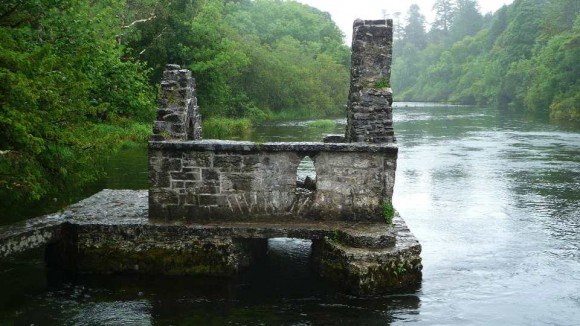 Cong and The Quiet Man

Only an hour’s drive from Westport, Cong is a small village in south Mayo famous for its 12th century abbey, the lavish gold and silver processional Cross of Cong from 1123, the magnificent Ashford Castle, the village’s links with Oscar Wilde and, most popularly, its association with the John Wayne classic movie, The Quiet Man. For any Quiet Man enthusiasts, The Quiet Man Museum is a must.

The Irish Gaelic name for Cong, Cúnga Fheichin, meaning Saint Feichin’s narrows, reveals much about the geography of the area. The village is built on a narrow isthmus of cavernous limestone between Lough Mask and Lough Corrib. No trace today remains of the monastery that Feichin founded in the 7th century. Cong Abbey, the ruins of which are in the centre of the village, was first built in the 12th century, burned in the early 13th and rebuilt between the 13th and 16th centuries.

From the abbey grounds, a footbridge spans the river, passing the monk’s fishing house pictured above, probably built in the 15th or 16th century – fish would have been an important part of the monks’ diet. This small house is built on a platform of stones over a small arch that creates a passage for water to flow under the floor. A trapdoor in the floor may have been used to allow a net to be cast into the river, and a fireplace kept the monks warm while they waited for their catch. It is said that a line was strung from the fishing house to the abbey kitchen, to alert the cooks when there were fish to be cooked.

This footbridge leads to the Cong Forest Nature Trail.

A walk along the dry canal rekindles memories of the great Irish famine of 1845-1848. The canal was a famine relief scheme that never quite fulfilled its promise in any sense of the word. At completion of the project, because of the limestone terrain, the water disappeared immediately into the ground like water gurgling down the plug hole of a bath.

The Market Cross on Cong’s main street is the first historical feature you encounter in the centre of the village. The decorated limestone cross is said to mark the completion of the Royal Abbey of Cong in the 12th century. 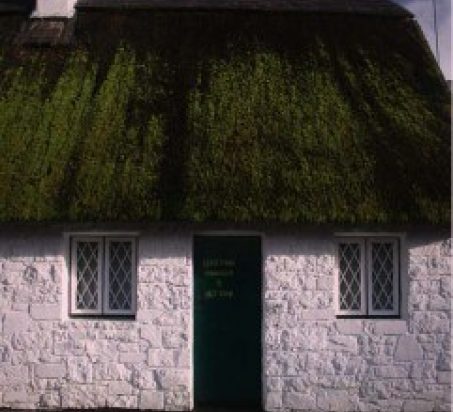 Perhaps the most famous thing about Cong is the 1951 movie The Quiet Man starring John Wayne, Maureen O’Hara, which was made there.

The Quiet Man Cottage Museum is a novel concept which will give visitors a total Quiet Man experience as if they were actually ‘on-set’. Located by the river at Circular Road, Cong, between actual locations used for the filming, the ground floor of the cottage has been designed as an exact replica of White-o-Mornin’ Cottage.

Painstaking effort has ensured that all the furnishings, artifacts, costumes, etc are authentic reproductions. The four-poster bed and the tables and chairs which Mary Kate cherished, the thatched roof, emerald green half door and white-washed front combine to charm all those who visit it.

The Quiet Man Cottage Museum is a must for any Quiet Man enthusiasts or even those wishing to visit a typical Irish cottage of the 1920’s. 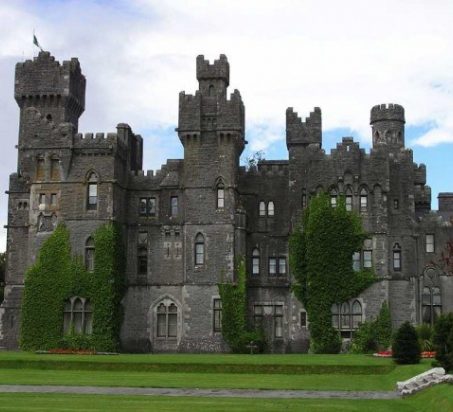 The famine era also saw the Oranmore and Browne family vacate Ashford House in 1852 and heralded the arrival of the famed Guinness brewing family to the area. Arthur Guinness (Lord Ardilaun) devoted much of his life and considerable wealth to the development of the castle, the walks, the forest and local historical artifacts. Ashford Castle is now a hotel.

Moytura House, about two miles east of Cong, overlooking one of the most scenic sections of Lough Corrib was residence of Sir William and Lady Wilde, parents of the famous Oscar. Sir William was a distinguished eye and ear specialist who became Surgeon-Oculist to Queen Victoria. He was also a renowned archaeologist and author of Lough Corrib, its Shores and Islands (1867). Lady Wilde was a supporter of the Young Ireland Movement and subsequently wrote for The Nation, the paper produced by the organisation.

Their illustrious son, Oscar Wilde, was born in Dublin although the aspiring playwright and poet spent much of his youth at Moytura House. Long after the family left the area, Oscar regularly returned to visit his home in the west of Ireland. On one trip he wrote to a friend:

I am sure you will like this wild mountainous country, close to the Atlantic and teeming with sport of all kinds. It is every way magnificent and makes me years younger than actual history records

Cong on the map