Kylemore Abbey is located at the base of Druchruach Mountain (1,736ft) on the Northern shore of Lough Pollacappul, in Connemara. 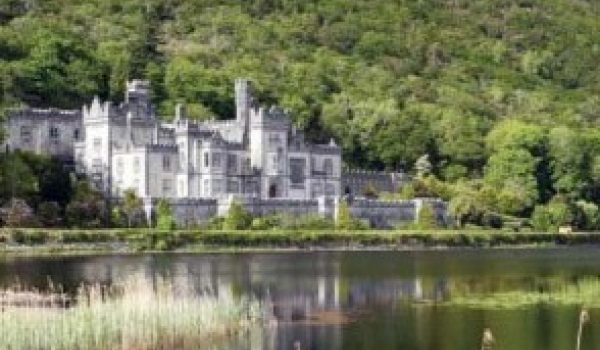 The Abbey was originally built as a romantic gift, and the Abbey and the surrounding mountains and lakes are steeped in history. Approximately 46km from Westport, past Leenane and The Killary Fjord, Kylemore Abbey, one of the West of Ireland’s top tourist attractions, is not to be missed.

Kylemore Abbey and estate are open to visitors all year round and the top attractions include:

Kylemore Castle was built by Mitchell Henry in 1867 as a gift for his wife follwing their visit to Kylemore while on honeymoon. Along with the castle, Henry built a Victorian walled garden and many walkways throughout the 13,000 acre estate. For years after the construction of the castle, Henry and his tenants turned acres of bogland into the productive Kylemore Estate.

In 1920, the Irish Benedictine Nuns purchased the castle and lands after they were forced to flee Ypres, Belgium during World War I.

The castle was converted into an Abbey, and the nuns continued to offer education to Catholic girls, opening a boarding school and a day school for girls from the local area. The school acted as the main educator for most girls from Renvyle, Letterfrack and further afield for almost a century, but it was forced to close in June 2010.

The gardens are open for public tours and nature walks, and a shuttle bus currently runs every 15 minutes to the garden from the visitors centre in Kylemore.

When visitors first see the spectacular wild bog lands of North Mayo, they may not realise that this blanket of soft bog covers an entirely different landscape hidden underneath. This is the Céide Fields, the remains of a Stone Age farmed landscape dating to between five and six thousand years ago. Their significance lies in the fact that it is the most extensive Stone Age monument in the world and the oldest enclosed landscape in Europe. It gives a unique insight into how sophisticated our ancestors were in their approach to farming land management.

The Céide Fields Visitor Centre, run by the Office of Public Works (OPW), is located beside the North Mayo cliffs. A viewing platform on the cliff edge allows visitors to safely look directly down onto the sea, over 100m below them, and on the fulmars nesting on the cliff ledges and circling below.

The pyramid shaped visitor centre emerges from the hillside, reflecting the shape of the Stags of Broadhaven islands to the west. It has won several awards including the Gold Medal for architecture for the OPW architects who designed it.

Inside the centre there are exhibitions on the bogs, geology of North Mayo and ancient landscapes with life size models of a Neolithic family, including the children’s favourite – “granny” in bed. Written translations of the exhibitions are available in French, German, Italian, Spanish, Dutch and Polish. The glassed viewing area at the roof level allows spectacular panoramic views from Donegal to Erris from both inside and outside. A 20 minute long film introduces the various aspects of Céide Fields and a tearoom provides welcome refreshments.

Guided tours of the site explain how this landscape has changed from forest to farmland, to bog land, to pine forest and back to bog again. Hear the story of the everyday lives of the Neolithic ancestors and their struggles against a changing environment. See the exposed field walls and dwelling enclosure on the Neolithic surface. Visitors can soak up the experience of what it is like to be an archaeologist by probing for a field wall and hearing the sound of the iron probe hitting the stone wall 2 meters beneath their feet, unseen in over five millenia. They can walk on the growing bog with its colourful variety of mosses, heathers, lichens, sedges and insect eating sundews, to the background music of the lark and maybe spot a hare, frog or lizard.

Only an hour’s drive from Westport, Cong is a small village in south Mayo, famous for its 12th century Abbey, the lavish gold and silver processional Cross of Cong from 1123, the magnificent Ashford Castle, the village’s links with Oscar Wilde and, most popularly, its association with the John Wayne classic movie, The Quiet Man.

The Irish Gaelic name for Cong, Cúnga Fheichin, meaning Saint Feichin’s narrows, reveals much about the geography of the area.

The village is built on a narrow isthmus of cavernous limestone between Lough Mask and Lough Corrib. No trace today remains of the monastery that Feichin founded in the 7th century.

Cong Abbey, the ruins of which are in the centre of the village, was first built in the 12th century, burned in the early 13th century and rebuilt between the 13th and 16th centuries.

From the Abbey grounds, a footbridge spans the river, passing the monk’s fishing house pictured above (probably built in the 15th or 16th century) – fish would have been an important part of the diet for the monks. This small house is built on a platform of stones over a small arch that creates a passage for water to flow under the floor. A trapdoor in the floor may have been used to allow a net to be cast into the river, and a fireplace kept the monks warm while they waited for their catch. It is said that a line was strung from the fishing house to the Abbey kitchen, to alert the cooks to the time when there were fish to be cooked.

This footbridge leads to the Cong Forest Nature Trail.

A walk along the dry canal rekindles memories of the great Irish famine of 1845-1848. The canal was a famine relief scheme that never quite fulfilled its promise in any sense of the word. At completion of the project, because of the limestone terrain, the water disappeared immediately into the ground like water gurgling down the plug hole of a bath.

The Market Cross on Cong’s main street is the first historical feature visitors encounter in the centre of the village. The decorated limestone cross is said to mark the completion of the Royal Abbey of Cong in the 12th century.

Cong was the filming location for John Ford’s 1952 Oscar-winning film, The Quiet Man, featuring John Wayne, Maureen O’Hara and Barry Fitzgerald. Much of the film was filmed on the grounds of Ashford Castle. The town and castle area remain little changed since 1952, and Cong’s connection with the movie make it a tourist attraction, particularly popular among movie buffs.

Roman Catholic records for Cong did not commence until 1870. Church of Ireland records from the 18th and 19th centuries have survived and are held at the South Mayo Family Research Centre in nearby Ballinrobe.

As visitors enter through the grand stone gates, a Royal adventure begins. This remarkable 800-year-old castle, widely recognised as Ireland’s top hotel destination and once home to the Guinness family, is now fully restored to its historic splendour and is now an 83-bedroom luxury castle hotel. Discover exquisite interiors, delicious cuisine, a wealth of unique activities and a state-of-the-art spa here.

Moytura House, about two miles East of Cong, overlooking one of the most scenic sections of Lough Corrib was the residence of Sir William and Lady Wilde, parents of the famous Oscar.

Sir William was a distinguished eye and ear specialist who became Surgeon-Oculist to Queen Victoria. He was also a renowned archaeologist and author of ‘Lough Corrib, its Shores and Islands (1867)’. Lady Wilde was a supporter of the Young Ireland Movement and subsequently wrote for The Nation, the paper produced by the organisation.

Their illustrious son, Oscar Wilde, was born in Dublin although the aspiring playwright and poet spent much of his youth at Moytura House. Long after the family left the area, Oscar regularly returned to visit his home in the West of Ireland.

On one such trip he wrote to a friend: “I am sure you will like this wild mountainous country, close to the Atlantic and teeming with sport of all kinds. It is every way magnificent and makes me years younger than actual history records”.

The Cong Canal was built over the course of five years by the Commissioners of Public Works between 1848 and 1854, as a combined scheme to provide navigation, drainage and mill-power.

In 1854, the Commissioners abandoned the navigation aspect of the scheme and instructed Samuel Roberts, their engineer, “to suspend the execution of all navigation works in this division of the district, and complete only such as were necessary for the regulation of the waters of Lough Mask, for drainage purposes.”

Now, it is commonly known as the “Dry Canal”; the water level can vary between zero inches and 12 feet depending on the time of year (in the Summer it is dry and in the Winter it is full) and is three miles in length. Built heritage features of the canal remain to this day.