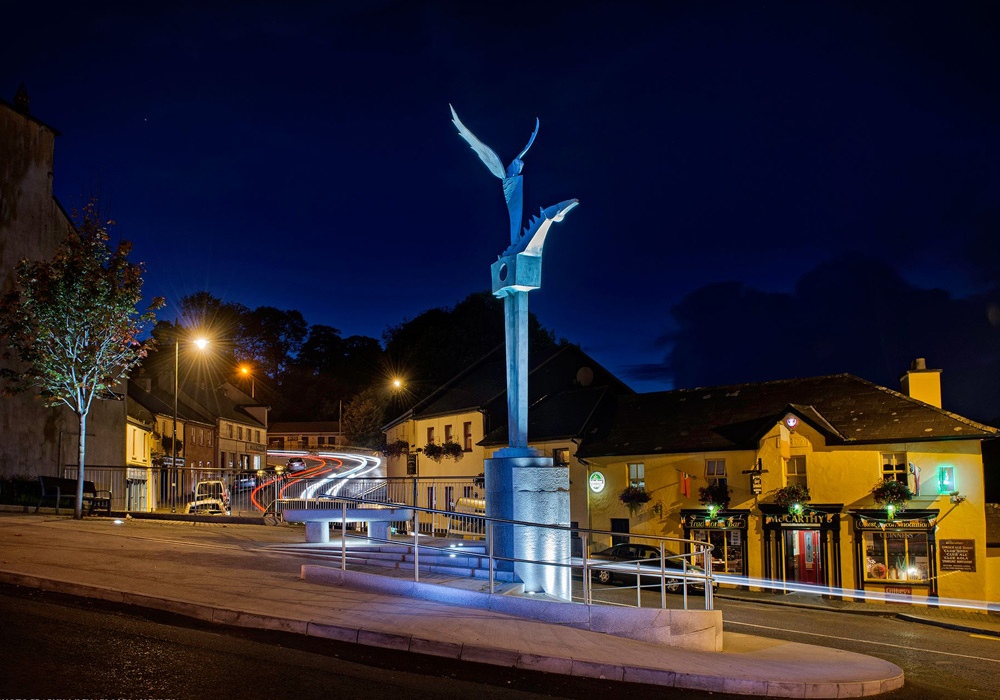 The story behind five landmarks in Westport town

As you stroll around Westport town, keep an eye out for these landmarks, then wow your friends with all your local knowledge.

This monument, with its eight-sided octagonal plinth and impressive column, was erected between 1843 and 1845 in memory of the local vicar’s son, George Clendining – a wealthy banker who contributed to the development of the town, and an agent for the Browne family of Westport House. Originally, the monument carried a full-size statue of Glendining atop the column, but in 1923, during the Civil War, Free State troops used the statue for target practice and shot off his head. Ouch.

In 1943, the local authority finally removed the statue and accompanying crests and inscription. Eventually, in 1990, a statue of Saint Patrick, crafted in Portland stone by sculptor Ken Thompson, was placed on top of the column. Matching panels depicting scenes from the saint’s life were added later.

‘The Clock’, which stands at the bottom of High Street and the corner of Bridge and Shop Streets, is a favourite meeting spot for locals and visitors alike. Think of it as the Westport equivalent of another well-known meeting point – Clery’s clock in Dublin.

Erected in 1947, and replacing an old fountain on the site, The Clock is the only Art Deco municipal clock in Ireland. The freestanding clock tower is built on a square plan and set on a concrete-brick cobbled footpath.

The Clock is also known locally as ‘The Four-Faced Liar’, as it frequently tells the wrong time, and can even simultaneously show different times on each of its four faces… So if you’re arranging to meet someone, best to go by your own watch!

Beneath the clock tower stands a traditional wooden phone box which was first placed at the location over 60 years ago, in 1957. No mobile phones back then! When the public pay-phone was eventually decommissioned, the phone box started to get a little run down, so Westport Tidy Towns stepped in to make sure it got a good lick of paint and was kept clean.

Its latest incarnation stands as a testament to the town’s healthy spirit of volunteerism. Three community groups – Westport Order of Malta, Westport Tidy Towns and Westport Men’s Shed – came together to revamp the kiosk and install a defibrillator within. A truly heartwarming and potentially lifesaving community act that also preserves the memory of a less-connected time, when phones were stuck on walls and you had to press Button A when someone answered your call.

Standing tall and proud at the bottom of Peter Street is the magnificent six-metre-tall bronze and stainless-steel sculpture named The Sentinel. Created by acclaimed Achill-based sculptor Ronan Halpin, it depicts a ‘spirit horse and rider’ that both points the way to Croagh Patrick for pilgrims and protects the townspeople. It is both an angel and guardian.

The sculpture sits on top of a circular stone pier, itself some four metres high. The pier symbolises the prow of a ship, with The Sentinel as the figurehead.

This wonderful example of Irish public art was commissioned by the town in 2013 to celebrate being named The Best Place to Live in Ireland by The Irish Times.

Also known as ‘Foxy Jack’, MacBride was an Irish republican and military leader executed by the British for his participation in the 1916 Irish Easter Rising in Dublin. Before his involvement with the republican movement, he was a member of the Boer Army that fought the British in the Second Boer War, rising to the rank of major.

MacBride was born in 1865 at The Quay, Westport, to a shopkeeper and trader Patrick MacBride and his wife, Honoria Gill. MacBride married famous Irish nationalist and suffragette Maud Gonne in 1903, and the couple had a child (Maud’s third), Irish politician and Nobel Peace Prize winner Seán MacBride.

The bust, which stands on a six-foot-high limestone plinth, was made by Irish sculptor Peter Grant. Erected in 1983, it was publicly unveiled by President Patrick Hillery. Eight must-dos while in Westport