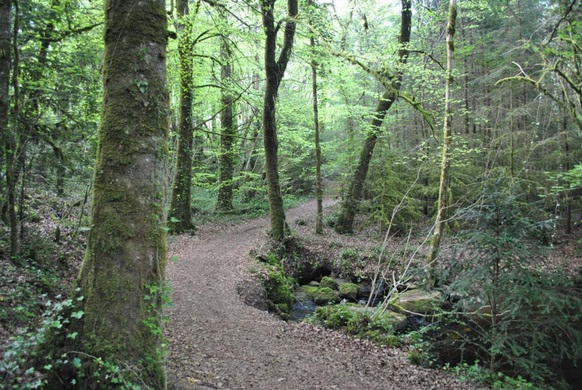 Starting at the church car park, enter the Cong Abbey grounds across the road and walk through the yew grove on the grounds. Many of these trees are over 100 years old. Cross the Cong River on the small stone bridge, the Abbey Bridge. On your left, as you cross the bridge, note the Monk’s Fishing House, where the monks caught fish for the abbey kitchens through a hole in the floor.

At the far side of the bridge, you will enter the forest through a stone gateway. Turn left along the path for about 200m. There, turn right and follow the nature trail markers. Note the variety of trees, including specimens of common Silver Fir, Douglas Fir, Sitka Spruce, Scots Pine, Coastal Redwoods, Giant Sequoia, Monterey Pine and many more species, both coniferous and deciduous. Many of these were planted by Lord Ardilaun, one of the Guinness family who lived in Ashford Castle nearby.

At the finger sign for Teach Aille, cliff house in English, turn right and down into the cave site. This is said to have been used by the monks as a fridge or larder, due to its low temperatures in the summer months. Steps beside the cave lead to higher ground above the cave. Follow the marked trail to a junction. Here, turn left under a viaduct, which is on the Cong/Cornamona road. Proceed along the trail to an old disused house on your left.

Turn right here and walk towards “Pigeon Hole cave”. There are steps down into the cave, where you can see a stream that is flowing underground from Lough Mask into Lough Corrib.

From here, proceed along the track leading back to Cong. You will pass under a small viaduct and along the banks of the Cong river and back to the Abbey Bridge where you cross back into the Cong Abbey grounds, where you began.

A map of the walk is available here.