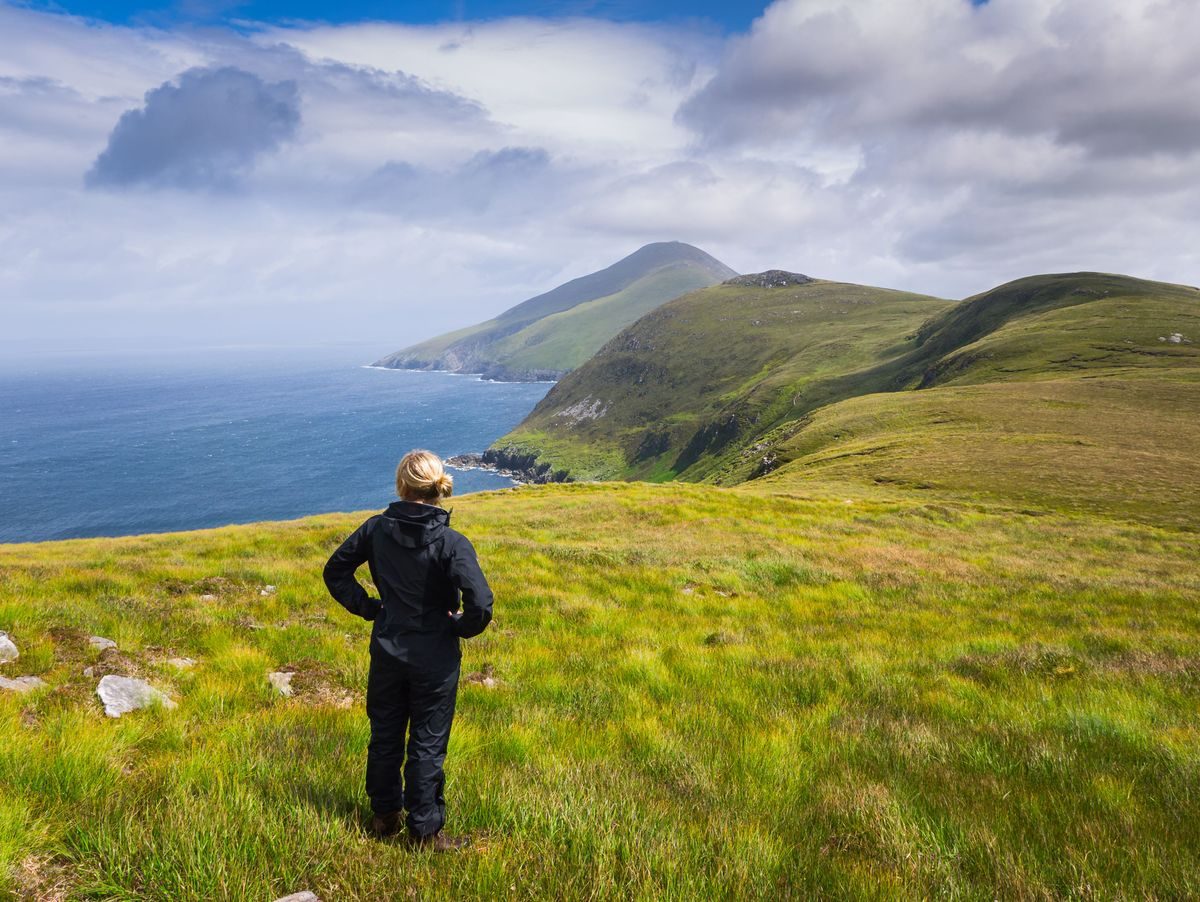 Whether you get to Achill from Westport by car, bike or boat, you won’t be sorry you took this day trip. World-famous beaches and cliffs, poignant history and a cheeky spirit make this Mayo island a dream day out.

A jewel at the western tip of Achill Island – one of Europe’s most-westerly points – Keem Bay’s golden crescent-shaped strand drifts into a turquoise sea, while the cliffs that flank the strand on either side make you feel like it’s your own private, prehistoric hideaway at the end of the earth.

Describing the ‘gloriously remote’ setting as ‘proper wilderness’, The Lonely Planet named Keem one of the 20 best beaches in the whole of Europe. And the best part, it’s only an hour’s drive from Westport. Time to get beach ready!

If you’re lucky, a visit to Achill will also mean spotting one of the massive basking sharks that feed in the island’s shallows. These magnificent beasts, which are typically six- to eight-metres long, cruise along leisurely munching on the plentiful plankton of pristine Keem Bay. It truly is a sight to behold, one that will stay with you for the rest of your life.

Huge and harmless, these sharks have no predators, apart from humans. Once fished from Achill for shark liver oil, the practice has thankfully long since been stopped. Today, basking sharks are considered ‘endangered’ in the northeast Atlantic, and they are protected. We just love these gentle giants.

A haunting reminder of the past, Achill’s Deserted Village is a string of some 80 to 100 stone cottages on a mile-long stretch of road on the southern slopes of Slievemore mountain. Over time, the village was gradually abandoned due to evictions for non-payment of rent, the Great Famine and emigration.

According to archaeologists the field systems and the lazy beds (traditional potato rows) found in this area indicate several occupation phases, while some remains suggest there was a settlement here during the Anglo-Norman period. The area itself is rich in archaeological artefacts, including megalithic tombs dating from the Neolithic period some 5,000 years ago. Mind-boggling.

It might take two or three hours to do the Granuaile Loop, but it is so worth it. Kicking off at Johnny Patten’s Public House, Derreens, the start of this 6.8km trail passes along old bog roads and open moorland. It then joins an old grassed-over road that was built in the early 1940s by local men who couldn’t go to England due to the threat of German U-boats.

Before you know it, you’re hit with panoramic views of Clew Bay, Croagh Patrick and Clare Island. Other finds along the way include 40 large stone cairns – monuments of an ancient burial site on the old funeral path to Kildownet Cemetery, known locally as the ‘Leachtaí’.

High on a hill above Pollagh, ‘Achill-henge’ stands defiantly tall. Built without permission in 2011 over a single weekend, its purpose and meaning remain shrouded in mystery. The massive structure consists of a circle of 30 concrete columns topped by a ring of stone. It rises over 4m from its base, is 30m in diameter and has a circumference of close to 100m. The projected cost of its manufacture and installation is reckoned to be over €1 million.

The man responsible for Achill-henge, island native Joe McNamara, is also known as ‘The Anglo Avenger’ after he staged high-profile protests in Dublin during the financial crisis – one incident saw him drive a slogan-painted cement mixer into the gates of Leinster House.

Some say Achill-henge is a tomb for the Celtic Tiger, others say it is simply a place for quiet contemplation, while others who are less enamoured with it describe it in less printable words. Stand in the middle of it and make up your own mind! Five of the best picnic spots around Westport