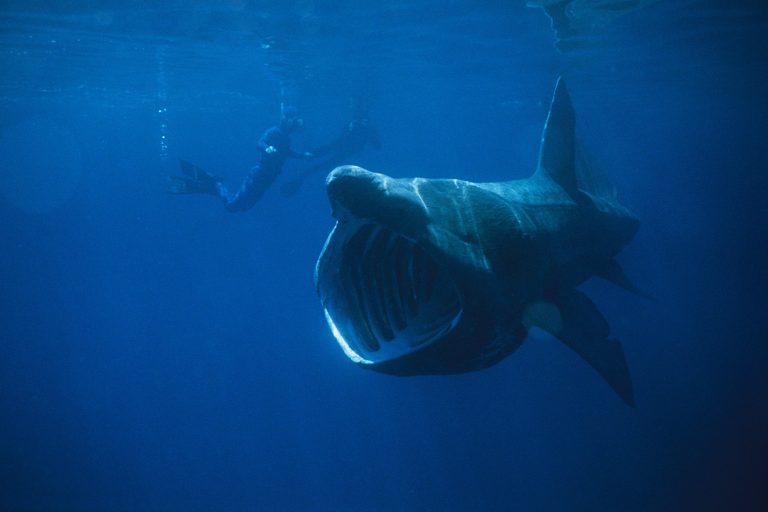 The spectacular wild Mayo landscape that surrounds Westport – which includes everything from bog to beach, mountain to meadow, sea cliff to forest – is a sanctuary to many examples of wildlife species that are struggling to survive elsewhere in a world of ever-shrinking habitats and ever-polluting practices. Here are just five of the rare species we are proud to give a home to and protect here in Mayo.

Basking Sharks, the second-largest living sharks, enjoy munching on the plentiful plankton of Achill’s pristine Keem Bay, an hour’s drive up the coast from Westport. Standing on Keem’s beautiful crescent-shaped beach, you can often see these gentle giants – which typically reach six to eight metres (20 to 26 feet), cruising along – cruising along through the turquoise water, sometimes escorted by playful resident dolphins.

A slow-moving filter feeder, the species derives its common name from its habit of feeding at the surface, which makes it look as though its basking in the warmer water there. It’s massive mouth is perfectly designed for the filtering task, and it sifts the plankton from the brine with ease through its enormous gills.

While they have numerous teeth, often up to 100 a row, these teeth are very small – basking sharks are no scary Jaws types. This species also has the smallest weight-for-weight brain size of any shark, reflecting its relatively passive lifestyle. A warning to us all in this sedentary age!

Huge and harmless, these fish have no predators, apart from humans. Once fished from Achill for shark liver oil, the practice has long since been stopped. Today, Basking Sharks are considered ‘endangered’ in the northeast Atlantic, they are protected from hunting.

With their Irish range now limited to just six counties along the western seaboard (Cork, Kerry, Limerick, Clare, Galway and Mayo), we are delighted to have a resident population of these endearing little creatures in the county. Lesser Horseshoe Bats are the only Irish bats to adopt that classic bat sleeping position – hanging upside down, often with their wings wrapped tightly around them like a cloak.

These sweeties have unfortunately been saddled with a rather unattractive facial feature. Their nostrils are surrounded by flaps or folds of skin that form a horseshoe shape, giving it its name. While zoologists politely call it ‘a noseleaf’, no pretty name can ever compensate for the hideous reality of that nose’s appearance.

The Mayo population (Ireland’s most northwesterly) includes a colony that has taken up residence in the basement of what is now a bat-preservation site – a spectacular old Georgian mansion, Moorehall, that has been deserted. The wooded Moorehall estate is just half-an-hour’s spin from Westport, on the shores of stunning Lough Carra, and a truly beautiful place to explore.

Mayo – Mulranny in particular – could be the last stronghold of the rare, distinctive, gorgeously colourful and undeniably charming Old Irish Goat. The original and only landrace breed of goat in Ireland, its future hangs by a thread. While only individuals now exist in mixed herds elsewhere along the western seaboard, it is thought that the Mulranny hills support a small group of genetically pure animals and therefore hold the key to the breed’s future.

The Old Irish Goat is smaller than other, ‘improved’ breeds. A cold-weather breed, they also have small ears to reduce the risk of frostbite, a long face to warm the air in the nasal passages and a big belly to accommodate large quantities of nutritionally poor forage. Their characteristic shaggy coats of many colours also conceal a thick cashmere undercoat that keeps them warm during harsh weather.

The goats’ other distinctive feature has to be their fabulous horns, arching backwards and often swooshing improbably outwards, forming massive hoops and handlebars that proudly describe the age of the head that carries them. Some not only boast impressive beards, but fetching hairdos too – keep a look out for the Mulranny Old Irish Goat nicknamed Elvis (AKA Donald Trump), who sports an especially eye-catching coiffure.

Mulranny, which also has a spectacular beach, is just half an hour’s drive from Westport.

The loud ‘kerrx-kerrx’ sound of the male corncrake has been likened to the sound of two cheese-graters rubbed together, producing a sound so monotonous that the bird has been dubbed ‘the world’s worst singer’. Despite its croakiness, however, the call has been a welcome sign of summer for countless generations, as the cornkrake only ‘sings’ during the mating season, which runs from May to early August.

Sadly, the chances of hearing this gravelly sound are growing rarer and rarer, as the bird is endangered and teeters on the brink of global extinction. The corncrake nests in hay meadows, and its decline is largely due to intensive farming practices, including early mowing for silage and mechanised hay-making practices, which have destroyed nests and driven the birds from their old habitats. They are now confined to areas where difficult terrain makes the use of machinery impossible or where traditional late hay-making still takes place.

Once widespread throughout the country, corncrake numbers dwindled from several tens of thousands in the early 1900s to just 129 by 1994. These shy, secretive birds are now only found in small numbers in the Shannon Callows, north Donegal and western parts of Connacht, including Belmullet and Achill in Mayo.

Anyone who hears the corncrake’s call is encouraged to call the Corncrake Hotline (yes, there is such a thing!) on 076 1002517.

When asked what they think is the fastest animal on earth, most people say the cheetah – but they’re wrong. The fastest member of the animal kingdom outstrips the cheetah by an incredible 130mph, reaching speeds of 200mph (322km/h): It’s the Peregrine Falcon.

These extraordinary creatures were recently very much in danger in Ireland, but they have been brought back from the brink and are now doing well. There are now around 425 breeding pairs in the country, and Mayo is viewed as one of their strongholds.

Peregrines love Mayo’s spectacular, wild uplands and our dramatic coastal cliffs, ideal for breeding and feeding. Sites include Ballycroy National Park and Ballycastle’s cliffs at the neolithic Céide Fields, which offer visitors from Westport a great mix of history and nature on a day out.

The Peregrine Falcon population is still recovering from a dramatic and well-documented decline in the 1950s and ’60s due to the effects of pesticide poisoning. The responsible pesticides have been banned, and the species has been recovering slowly.

Falcons sometimes have a bad name among farmers, who mistakenly think that they take hens or lambs. However, peregrines only take prey in the air when in a downward stoop. If they hit the ground at 322km/h, they’d be feathery pancakes, so they would never go after anything that doesn’t fly. They’re actually beneficial for farmers, because they help to keep local crow population in check.