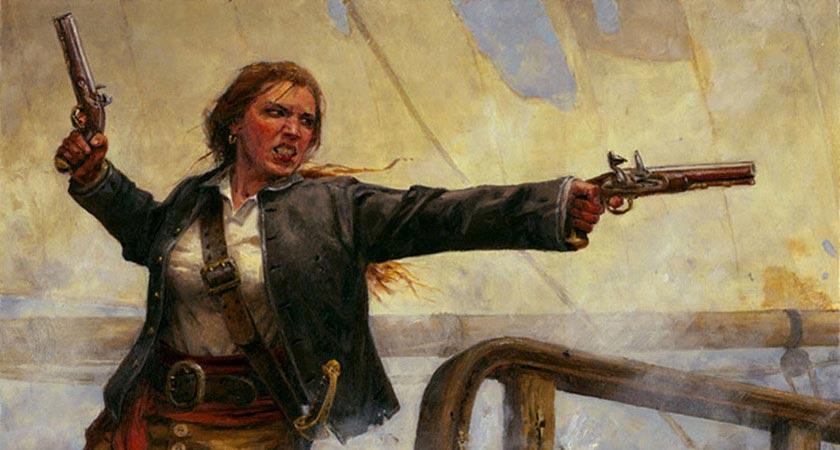 Granuaile, also known as Grace O’Malley, The Pirate Queen and head of the O’Malley Clan.

Born around 1530, the daughter of a Gaelic chieftain, she excelled in the traditional seafaring attributes of her family – sea-trading to Ireland, Scotland and Spain, with some piracy and plundering on the side – before she assumed the more traditional role of wife and mother in a politically-arranged marriage.

As a child, legend has it that she cut off all her hair to disguise herself as a boy to steal onto one of her father’s ships as he set sail on a trading expedition. He had refused to take her because at that time, it was considered bad luck to have women on board at sea. This is the source of her name Gráinne Mhaol (or bald Gráinne), anglicised as Granuaile.

After she was married, convention again did not deter her, when she displaced her more reckless first husband in his role as chieftain and later avenged his death. Neither did it deter her from divorcing her second husband, from taking a lover or from reuniting with her husband to oppose the English. He seems to have been content to walk in her shadow.

When Gaelic law spurned her as a female chieftain, she endured the same danger and hardship as her followers. Her ability and success render ed the Salic code – which debarred women leaders – redundant. Her daring and charisma made her leader of an army of 200 men and captain of a fleet of galleys.

Fearless in battle, she personally led her army against English generals who tried to curb her power. Eventually she became matriarch or overlord, not merely of her own followers and extended family, but of neighbouring clansmen, whose chieftains had either died in the numerous conflicts of the period, or had abandoned their obligations to protect their dependent followers.

By 1593, she had a catalogue of rebellion, piracy and other “disloyal” activities as long as her arm registered against her at the English Court, and she bore the tags “nurse to all rebellions for forty years” and “a director of thieves and murderers at sea.” Nonetheless, she boldly sailed her galley from her castle on Clew Bay on the west coast of Ireland to Greenwich Palace to negotiate face-to-face with her perceived enemy Queen Elizabeth I. Granuaile persuaded the English queen to fly in the face of the advice of her own military men in Ireland and not only kept her head but ensured her family’s future security and her own freedom until her death in 1603.

Above all else, she emerges as a woman who broke the mould and thereby played a unique role in history.

Around Clew Bay, several of her fortresses survive: